I didn’t exactly complete this goal first, but I had to start working on it first since the race was only 5 weeks after my 29th birthday.

I’ve been wanting to do the Cooper River Bridge Run ever since I moved to Charleston and by this year I’d already passed up six annual opportunities. Everyone talks about it, the whole town participates (in either the running or the drinking, whichever) and I’ve just felt left out and guilty as hell for not even trying.

Full context: I ran cross country in high school and I wasn’t terrible at it. Not amazing, not terrible. I ran a 22 minute 5K and 6 minute mile. There were days I ran 8-9 miles, but never at race pace, so I’ve really had no experience with 10Ks. And that was obviously over 10 years ago…

I’m very  hard on myself about certain things, and I could not bear the thought of either having to walk part of it or not being able to finish. When I first thought about creating a “30 before 30” list, this race immediately came to mind. And then I realized it was already December and the race was less than 4 months away, and I hadn’t run in months. Even then, I rarely ran more than 3 miles. Oh my…

A big part of me wanted to push it until the following year and give myself more time to really train. But the 2018 race is a month after I turn 30 and would defeat the purpose. So I decided to quit being a little bitch and came up with a plan.

The “grand plan” had a few more runs on it than this list, but here below are the miles I actually made time for. I was pretty amazed that it took less than 30 runs (most of which were four miles or under) to work up to over six. Do I wish I could have trained more? Of course. But it was also January-March, so there were several head colds that got in the way, as well as a 5 day trip to NYC. Though, I walked on average 28,000 steps (over 10mi) per day while I was there, so I don’t think my legs lost anything:) 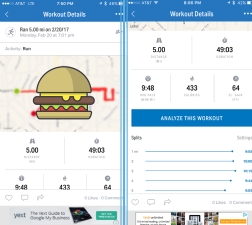 I usually like to use both my Fitbit and the MapMyRun app on my phone to track runs. I use both just so I can get a general idea of pace from my Fitbit while I’m running but then have a very accurate time and distance logged with my phone at the end. Fitbit just doesn’t have the accuracy unfortunately. I focus a lot on the splits because I’m pretty terrible at pacing, so I have to focus on not having 8 and 11 minute miles in the same run:) 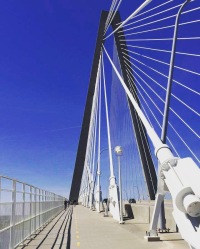 Towards the end of training, a lot of my miles included hill practice since the bridge’s incline is lengthy and no joke. The first time I practiced the bridge, I couldn’t even run all the way up ONCE and it totally freaked me out. Luckily by race day I was ready for it, albeit a little nervous.

Pro-tip: Be careful training for a race and doing Whole30 for the first time. The last 4 weeks of training, I was on Whole30 and my runs got a lot slower. Like, a lot. I don’t blame the diet, I just had a hard time since I wasn’t getting the carbs my body was used to. Luckily I finished the diet a couple of days before the race so I had time to carb up. I do recommend Whole30, but I really do not recommend trying it for the first or even second time in the month leading up to a race like this. Unless your body is used to it, you’re going to feel like hell trying to get miles in.

I also managed to completely throw my hip out of whack for the last half of my training. It didn’t hurt so much when I ran, but I hobbled around like a cripple whenever I walked. Because of this, I ran a 5K the following week for a work function and then hung up my running shoes for a while to heal. (Didn’t realize that “for a while” would turn into over 2 months, but, it happens.)

All in all I was super proud of this one! I finished the race, though it was slow-going (1:06 / 10:30mi pace). I kind of kicked myself at the end for not going faster when I felt that I could have, but I was just so worried that for some reason I wouldn’t finish without walking that I took it slow and steady. Next year I’m committed to running it in under an hour. 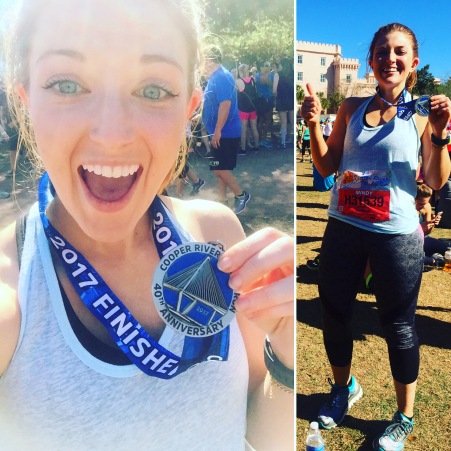